Religious faith was fervent and meaningful in the lives of Dutch colonists. The original Reformed Church at Esopus, constructed in 1660/61, was burned by Indians but was soon rebuilt. When Pieter(2) Pietersen arrived in Wildwyck (later Kingston) at the end of 1663 he was six years old and his family consisted of his mother Geesje Jans, nine year old sister Tryntje Pieters, three year old half-brother Herman Arentsen [Pier] and stepfather Arent Teunissen. Both of his half-sisters were born in Wildwyck – Jannetje Arents [Pier] in 1664 and Gepje Arents [Pier] in 1668 and were baptized in the Old Dutch Church of Kingston, before the family relocated to Hurley by April 1670. A stone church replacing the rebuilt structure was constructed in Kingston in 1679, the year that Pieter(2) Pietersen married Rebecca Traphagen and it was burned out by the British during the Revolution but was later refurbished for another half century of use. Both Pieter(2) Pietersen and Rebecca Traphagen were residents of Westquansegh, a tract of farmland in Fox Hall Manor situated just north of the Town of Kingston, when they married. By 1687 they had relocated to nearby Hurley, where parishioners built their own Reformed Church in 1801 and an Ostrander was one of the early pastors. 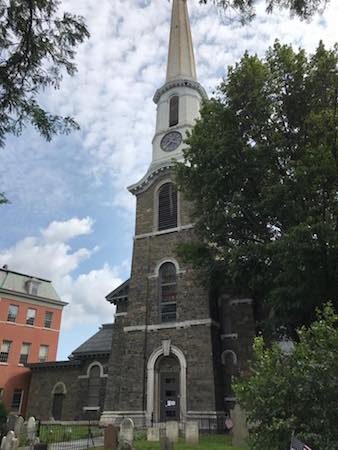